Building an software application using different algorithms, data-structures, frameworks, databases and messaging queues which can solve the mentioned problem efficiently and effectively. This is the first part of solving the problem. The second part is to deploy and maintain the application for high scalability and availability. This is as important as developing algorithms and building software applications.

To understand it's importance assume you have an application like imdb which will provide information related to movies, actors and their works. The expected workload on average could be 1000 requests per second with 300ms serving time for each request. The numbers are not quite high for some SQL db based application right? But without proper configuration applications will not be able serve even 100 request per second. Are you thinking we can increase just the number of servers to server more request as cloud providers allows to scale very quickly. Don't do that, it's possible that you will spend more money than you will generate.

The correct configuration to maximize the throughput of application is not just limited to properly configuring web-servers but also databases, messaging queues and other components of the entire application. In this article we will focus on how we can configure Django application on Apache web-server on Unix based operating system to maximize the output. We will not talk about why should we use an server to host our applications. I would recommend you to search about it on your own.

Apache allows to host applications in three ways Embedded, Daemon and Event mode. We will only talk about first two in the this article.

Embedded Mode: This mode is also known as prefork mode, this is implemented by Apache MPM prefork module. This is the default mode for the Apache server. In this mode both the proxy and the response processes are being managed by Apache only which is why it's called embedded mode. This mode is suitable for non-threaded applications or libraries. Here process are the ones which serve the request. Each process is isolated from another process. So even if there is an issue with one process, another will not be affected due to it. 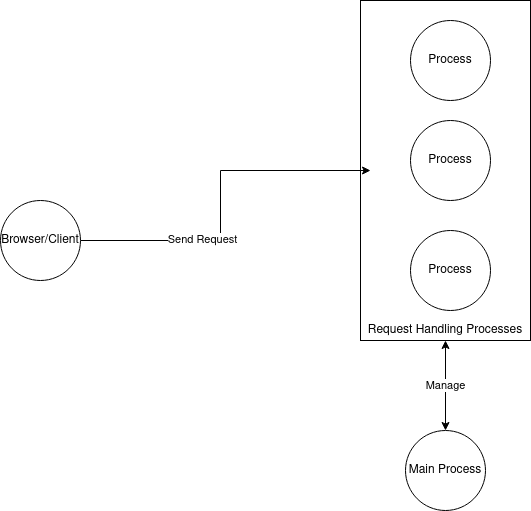 As we can see in the diagram the main Apache process manages the process which will serve the request. So in this case a lot of processes will get created and killed which will take substantial amount of CPU in managing these process. As a separate memory need to be allocated and releases for each process. Let's discuss about the configuration shown below

In case of embedded mode it's better to use default settings of Apache, until you are not an expert in Apache configuration and you understand working of Apache well. As in embedded mode process are created and killed frequently, it puts a lot of pressure on the system.

Daemon Mode: This is know as worker mode and implemented by mpmworkermodule. Worker mode implements a multi-process and multi-threaded approach to where the requests will be handled by threads instead of process. As the cost of creation and context switch for threads are quite less compared to process. We can refer the below diagram for better understanding 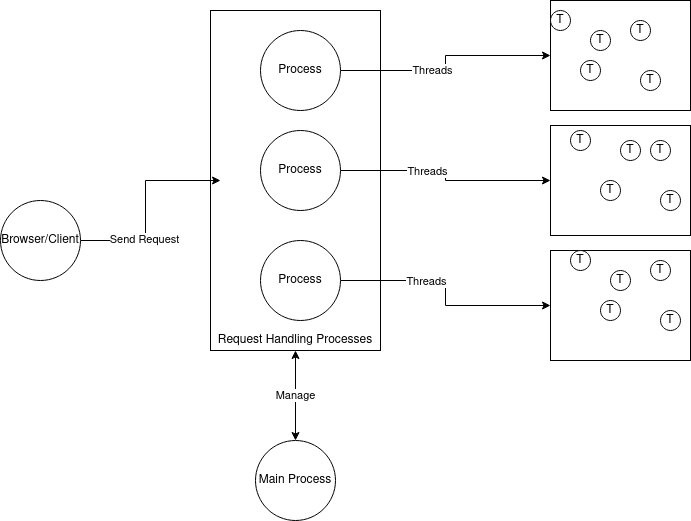 Here the parent process will maintain the worker process and worker processes will handle threads which will serve the request. Each request will be passed to thread. Here Apache will only work as proxy which will accept request and pass the request to one of the threads, hence reducing the wait time for users. Daemon mode configuration of Apache is more forgiving, as even if you have not done the configuration properly it will not consume all resources. Let's see an configuration sample for example

We will only talk about properties which we have not discussed

In the above configuration we have defined major of settings in number threads such ThreadsPerChild. Apache will automatically allocate enough process based on these number.

Now we know How does embedded and Daemon mode actually works, but still there is a question which mode should we choose and exactly why?

So that was enough of theory let's see in working daemon and embedded mode config.

We have created an docker file named Dockerfile.embedded, which uses an alpine image to do the configuration. We can split them into multiple steps

Run Docker file from the django-apache folder in your local docker build -f Dockerfile.embedded . to build docker image, which will return an image id once image is built, use imageid with the command `docker run -d -p 8000:80 imageid, This will run an container in your local and you can access the application on local port 8000 of your machine. Usecurl http://localhost:8000/movie` to access list of movies available in SQLite db.

There is another file name Dockerfile.daemon, which we can use to run application in daemon mode. Let's split the docker file in steps to understand what it does.

We can use the same steps as embedded docker file to run daemon mode docker file. Additionally we have included instructions to run application in embedded mode on Debian.

Let's end this post for now and we will see the difference in performance in some other post. You can find the source code for this post in following link.

Before we close the post, are you thinking why we are using Debian version instead of Alpine for Daemon mode?

Daemon mode does not works properly on Alpine Linux. The issue has been there for quite sometime. You can see following below links. Actually there is not much difference in the size of Alpine and Debian Slim buster container, it almost just 100 Mb.

To verify in which mode Apache server is running you can use apache2ctl -V in Debian or httpd -V Alpine. 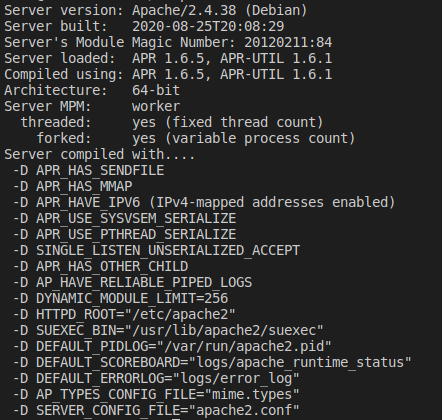 You can look at Server MPM section which will consist worker for Daemon mode and prefork for Embedded.